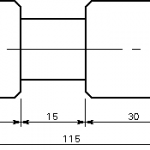 By Steve Dimensioning practices for metric drawings are similar to those for non-metric drawings, but there are some subtle differences. This material outlines the current practices. Dimension Lines and Projection Lines Projection lines are used to indicate the extremities of a dimension. They are generally drawn up to 1 mm from the outline of the object. … END_OF_DOCUMENT_TOKEN_TO_BE_REPLACED